Warialda Beef building a brand from the ashes 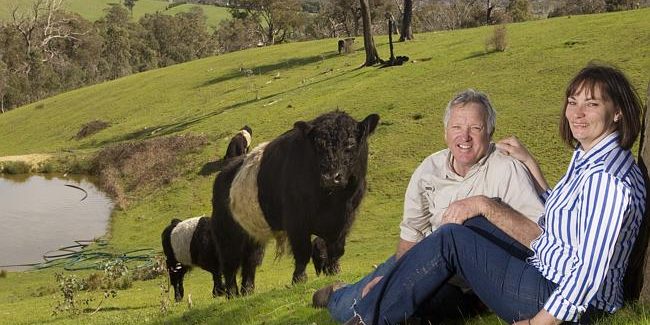 “Moving from growers to marketers has been hard work, says Lizette Snaith, who now sells nearly 800kg of prime beef direct to consumers and chefs each week, but the rewards are slowly coming for this unique beef and its dedicated producers.”

GROWING up in Melbourne, Allen Snaith always wanted to be a farmer. In the 1980s, the businessman started dabbling with a small holding and the handsome, if fashionable cattle breed Belted Galloways.

His wife, Lizette, was excited about the life of a farmer’s wife too when she made the dream come true, moving to the rural hamlet of Clonbinane full-time 25 years ago.

Black Saturday changed everything. Apart from losing outbuildings and some livestock, the textile business Snaith ran from Clonbinane, about an hour north of Melbourne, was destroyed and so was his “off-farm” income. What had effectively been a hobby suddenly became the couple’s prime concern, and the Snaiths soon realised the only way to make it work was “to think of ourselves as being in food, not just agriculture’’.

So began the process of becoming a brand, representing beef from slow-ageing, mature cattle dry-aged, butchered to their own specifications and sold directly. “They’re not mainstream cattle,” Snaith says. “So if you try to sell them in the conventional way, you get a caning.”

Moving from growers to marketers has been hard work, says Lizette Snaith, who now sells nearly 800kg of prime beef direct to consumers and chefs each week, but the rewards are slowly coming for this unique beef and its dedicated producers.

Last night in Sydney, Warialda Beef shared the award for best product in the From the Paddock category at the annual Produce Awards, a forum for the nation’s best producers, growers and harvesters judged by a panel of eminent chefs and food suppliers. Adelaide smallgoods producer San Jose was co-winner for its Wagyu bresaola.

It’s the equivalent of a food Oscar. Producer of the year went to the South Australian fishery Coorong Wild Seafood, which catches, sources, processes and markets Coorong yellow eye mullet.

Best new product went to the sea spray from Snowy River station, in far-eastern Victoria. Sea Spray is a delicate, fern-like salt water plant very much like samphire in shape and taste