The Zielinski family are selling the sizzle 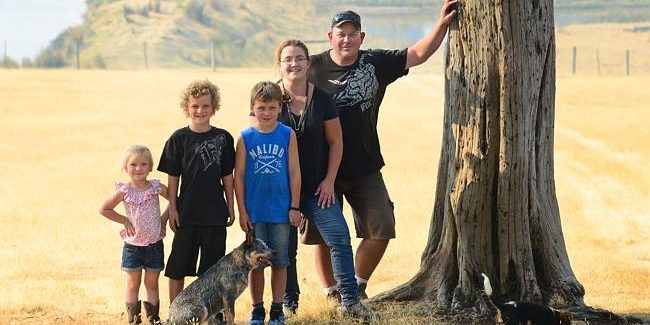 “And it is the aroma of slow-cooked pork roll with sweetcorn slaw, and the Saddleback sausages with caramelised onion, that lures customers to Marnie and Nick Zielinski’s Zed and Co stall at farmers’ markets.”

AS ANY foodie will tell you, it’s the nose that knows.

And it is the aroma of slow-cooked pork roll with sweetcorn slaw, and the Saddleback sausages with caramelised onion, that lures customers to Marnie and Nick Zielinski’s Zed and Co stall at farmers’ markets.

While the couple sell cuts of meat from their Wessex Saddleback pigs and their Highland cattle, as well as a range of vegetables, it is the fragrant bouquet of sizzling meat that is their secret weapon.

Marnie and Nick, and their three children, Charlie, 10, Jack, 8, and Maya, 4, live on seven hectares at Gordon, near Ballarat, and lease a further 30 hectares nearby. They say the farmers’ market experience is all part of their “big dream’’ – to become full-time farmers.
Here, Marnie shares her thoughts on life on the farm and the steep learning curve that comes with running a mixed enterprise.

Nick and I met at Lake Burrumbeet caravan park as teenagers. He grew up in Melton, very suburban, but I’m Ballarat born and bred, always surrounded by acreage.

We had businesses run from Bacchus Marsh for a few years – a garden supplies company and now a bobcat and excavation business. But the dream has always been to become full-time farmers.

We’d love to have 400 acres not far from here – it’s cold, but there’s good rainfall.
Five years ago we moved to Gordon, wanting to become self-sufficient. We didn’t want the children to be restricted to a backyard and wanted them to know where their food came from.

We’ve always learnt as we go along, although I did a Certificate Three in agriculture through Shepparton TAFE which was fabulous. It taught me a lot of what I needed to know, such as how to deal with pig births or large litters.

I’m pretty casual about life, you have to be with three kids and a farm, otherwise you’d go crazy.

We started with a vegie patch and we now have a poly tunnel as well, growing garlic, heirloom and standard tomatoes, zucchini, asparagus, rhubarb, mixed herbs and things like that.
It has been wrecked a few times. The cows, sheep and pigs have all had a go at the vegies and if it’s not them, it’s the rabbits. They don’t even eat it, they just taste it and move to the next plant. A piglet can make more of a mess than a cow.

So yes, we’ve had a few disasters there and we now fence it. Our farm is largely chemical free and we use animal manure and water from our spring-fed dam.

Nick and I had watched the UK TV series Jimmy’s Farm (about a British man who wants to be a pig farmer and make the best sausages money can buy) and I fell in love with Wessex Saddlebacks.

Five years ago we bought a pair of registered purebred baby Saddlebacks, bringing them home in a box in the car. I had squealing pigs and squealing kids. Because they’re a rare breed it’s important to keep their original lines.
We now have 15 sows and three boars, breeding up to 300 piglets a year. They are a nice, easy-going breed, a nice temperament and they make good mothers. They do have more fat on them but it’s a good flavour.

We slaughtered our first pigs in 2010 at Diamond Valley Pork in Laverton North.

Now we slaughter about two pigs a fortnight at about 50kg. We just judge them on how they look as to whether they’re ready. We get them butchered in Ballarat, using the nose to tail, making use of as much of the animals as we can. We also sell live piglets to other farms.

We started off farming to feed ourselves but the aim was always to run a commercial business.
So in 2012 we made an investment in a mobile coolroom trailer, which Nick built, and attended our first market in Daylesford in September, after doing a food handler’s course and a supervisor course.

Now we sell at farmers’ markets at Daylesford and Flemington, plus markets at Talbot and Creswick, as well as events through the year.

We sell the vegies and the cuts of pork, as well as ham and bacon. But it’s our Saddleback sausages and a slow-cooked pork roll with sweetcorn slaw and aioli, made by a Richmond chef, that sees people come up to our stall. Most people start off buying a sausage, then move to the pork roll and then buy the meat.

Nick is of Polish-Dutch background – his surname is the inspiration for the Zed and Co – and we hope to create a Polish sausage at some point. We have a whole list of things we want to do.
Before we started the farm I had photos in a scrapbook of Highland cattle. They’re just so pretty. Because they have such a thick layer of hair they don’t need fat to keep them warm and they’ve got a lovely nature.

In 2012 we bought six Highland cattle, then six more Highlands that were registered and we now have 15 cows and two bulls, and five young heifers due to calve soon.

Our plan is to we slaughter them at about 400kg or two years old.
HAVING a diverse range of livestock and produce is a good way to ensure we don’t have all our eggs in one basket. It’s mixing it up a bit.

We also have 25 black-faced Suffolk sheep. Again, they’re an attractive animal with a good reputation. But we just fill our freezer with them. Once we’ve got more land we’ll be able to grow them to sell at farmers’ markets.

I’d say the best advice for anyone thinking of becoming a farmer is to persevere, do your research and be prepared to ask lots of questions.

If I find anyone who knows anything I will pick their brains. Someone somewhere usually has the answer.’’

They sell through farmers’ markets at Daylesford and Flemington, plus Talbot and Creswick markets as well as to chefs.

Some of their biggest sellers are their value-added slow-cooked pork roll, sweetcorn slaw and aioli, made by a Richmond chef, as well as Saddleback sausages, cooked on site at markets.