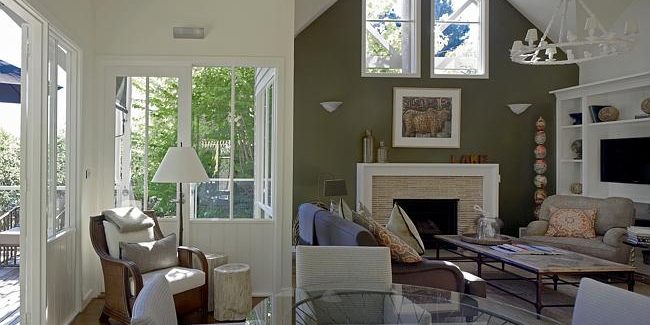 “The Retreat was opened in 2011 and is linked by pathways to Lake House proper but also has a separate street-front entrance and is nicely screened with brush fences and abundant greenery. ” – Susan Kurosawa, The Australian

Five-star hotels have long had top-tier accommodation that sits loftily above the average guestroom inventory. Frequently, these multi-roomed chambers fit categories such as Executive Suite or Junior Suite, the latter always suggesting (at least to me) that there would be Beatrix Potter wallpaper and rubber duckies in the bath. The name refers, in fact, to size, which is everything in the realms of hospitality, culminating with the Presidential Suite, which usually means a huge dining room, a writing desk befitting a head of state and adjacent sleeping quarters for a retinue of minions and minders.

My friend Jill and I once emerged from camping in Nepal’s Royal Chitwan National Park, all dusty khaki jackets and flyaway hair, to find we had been upgraded to the Presidential Suite at our next accommodation. The receptionist was insistent about the unexpected treat but the porter she summoned was not. He surveyed our frankly grubby canvas bags and muddy footwear and then grudgingly led us to a very smart abode filled with silverware and silk cushions. Upon his exit, and clearly underwhelmed by our tip, he couldn’t resist a parting remark. “And which impoverished country are the two Madam presidents representing?”

But I digress for here I am in Daylesford, northwest of Melbourne, tidily attired and checking into The Retreat at the award-winning Lake House. Like the top country hideaways in New Zealand, such as Huka Lodge at Lake Taupo and Matakauri Lodge at Queenstown, Lake House has incorporated a self-contained cottage into its tree-filled estate. The idea is to offer an even more secluded accommodation option that’s flexible enough for two couples or a family to share on a single booking or can be converted into two one-bedroom villas.

The decor of Lake House’s single-storey Retreat feels rather like Huka Lodge’s Alan Pye Cottage, with interiors by Virginia Fisher, and owner Alla Wolf-Tasker and daughter Larissa clearly are fans of this Auckland-based designer, the darling of kiwi lodge owners across the North and South Islands. There’s a touch of British designer Kit Kemp (of Firmdale Hotels fame) about it, too, in the mix-and-match colours and tactile textures, clusters of personal pieces, and a style that is innately residential and deeply comfortable, with a touch of woodland whimsy. Instead of the clinical cold of a job-lot decorator’s eye, there are craft pieces by local makers, including display plates by ceramicist Bern Emmerichs, and paintings by Alla’s husband Allan, a well-regarded artist whose garden studio is tucked into the 2.4ha Lake House estate, which also serves as a larder for the kitchen.

So, sink into amply cushioned Coco Republic couches, wallow in big tubs in lovely grey-and-white bathrooms, flick a switch for the automatic gas fires, grab a magazine from the substantial stash of current titles or check the movie collection, perhaps with a tipple to hand from the honour bar. The Retreat was opened in 2011 and is linked by pathways to Lake House proper but also has a separate street-front entrance and is nicely screened with brush fences and abundant greenery. From the front terrace are views of Lake Daylesford, skirted with poplars and silver birches and patrolled by dabbling ducks.

One of its courtyards has a central fire-pit and the other a daybed and bubbling hot tub reached via the enormous master bedroom. The small details are first-class, too, such as Nespresso machines, automatic gas fires, Elemis toiletries and jars of nougat and home-baked biscuits. Kitchen facilities mean guests can self-cater although why you would do that, when one of Australia’s best restaurants is steps away, I just can’t imagine. Executive chef Alla is a great supporter of local talent and sustainable produce, an indefatigable campaigner and mentor in the food industry, and her favoured providores (dairy, honey, meat, fruit, cheese, organic vegetables and so forth) are listed on Lake House menus. There is a purpose-built cooking school on site, too, with hands-on tuition and masterclasses headed by a roster of guest chefs.

Guests of The Retreat are served pre-dinner drinks and canapes in the lounge room by a butler from the main lodge — in our case, a delightful young Frenchman named Frank. That’s Frank as in “Fronk” and over two nights he’s generous enough to laugh at our silly impersonations of Martin Short’s so-named character in ­Father of the Bride.

Things to do in Daylesford? You are in the heart of spa country and the Hepburn Springs Bathhouse & Spa, a 3km skip away at Daylesford’s sister settlement, is a remodelled facility with an 1895-built heritage core incorporated into a contemporary building of stone and glass with hot swirling pools and steam rooms. Lake House’s award-winning Salus Spa must be sampled, too, including a session in its individual cedar cabins set like little tree-houses overlooking the lake and featuring soaking tubs filled with muscle-melting mineral water rich in magnesium, iron and silica.