Real good, unless it’s not real at all 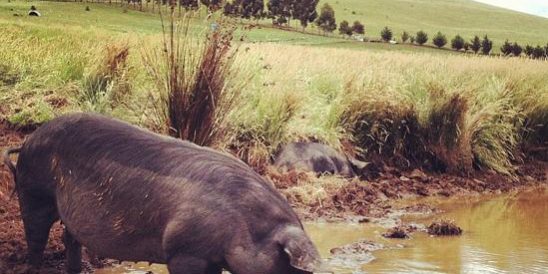 “About 70 of us showed up on an ordinary sort of June day to Jonai Farm, Eganstown, home to local evangelists for ethical animal husbandry and preservation of rare breeds for the purpose of producing trustworthy food, Tammi and Stuart Jonas.”

SO, we went to the farm. We saw the pigs. One sow was about to deliver, which excited the girls. We chopped flesh and fat. We mixed it with salt and other stuff, such has chilli and fennel. We pushed it into mincers and then a sausage stuffier and made salami. Lots of salami.

About 70 of us showed up on an ordinary sort of June day to Jonai Farm, Eganstown, home to local evangelists for ethical animal husbandry and preservation of rare breeds for the purpose of producing trustworthy food, Tammi and Stuart Jonas. It was fun, instructive and convivial. I drank a little red wine with the excellent buffet lunch, which may explain how it came to pass that I arrived home with an 11kg leg of fresh pork (Large Black) on my shoulder that is now in the process of turning itself, very slowly, into Prosciutto di Hepburn.

The point of all this is in the first sentence. We went to the farm. In the words of specialist produce distributors Feather & Bone, a Sydney-based business devoted to produce with provenance, “a farm either exists or it doesn’t”. They continue: “Beware of restaurants or retailers claiming they’re selling you ‘sustainable’ or ‘organic’ food.” To this I can only add my own voice. Heavy words are so lightly thrown. “If they’re genuine, they should be able to substantiate the claim and tell you the name and location of the farm on which it was produced and who sold it to them. That way, you can always verify the claim if you choose to follow up.” Are you thinking what I’m thinking B2? Portlandia. “Is It Local?” But this is serious, not West Coast US locavore satire. “And if you do follow up and the farmer doesn’t welcome your visit or suggests you might bring unwanted germs or diseases onto the farm then you can be sure that this is an intensive operation and any claims about ‘free range’, ‘pasture raised’ or ‘organic’ are very likely hogwash. In our experience, a genuine, sustainably run farm is safe for anyone to visit and the farmers are always very enthusiastic about showing visitors around.” Jonai is that kind of farm.

But branding food has its responsibilities. With the escalation of interest in — and education relating to — food in this country comes greater opportunity to sell small-scale, niche products, the result of non-commercial, slow, traditional agriculture or value adding. “Wild”, “rare breed”, “line-caught” yadayadayada … It’s all real good until it turns out it’s not real at all. It’s so easy to throw in expressions such as “free range” or “organic”.

The folks from the Australian Competition & Consumer Commission had a field day with food producers/vendors in June and all of it was about the halo effect conferred by feel-good descriptors that turned out to be lies. First came the very public outing of Saskia Beer’s Barossa Farm Produce company that turned out to be selling smallgoods under its The Black Pig brand with claims about free range and rare breed pigs. Only problem was that for more than two years it turned out the pork wasn’t what it claimed to be.

The following week, the ACCC took down Coles for its “Freshly Baked” and “Baked Today” claims on par-baked bread products. Then it pointed out that a mob selling honey imported from Turkey could not sell it as “Victorian Honey”. This has cost a company called Basfoods (Aust) Pty Ltd more than $30,000 in penalties.

Yes, “local” is worth almost as much as “organic” in foodie marketing, so why not? As the Feather & Bone folks say: “Mislabeling of food in shops and restaurants is rife … Every cent you spend with people who can demonstrate their trustworthiness contributes to building a better, more transparent and sustainable food production system.” Here endeth the lesson.