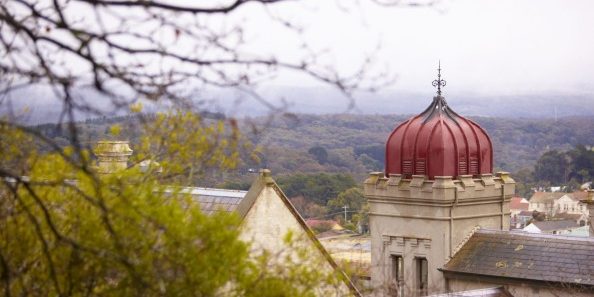 It’s a darn shame I’m just in town from Tuesday to Thursday, for the Tree Of Life on Daylesford’s leafy main street provides spiritual blessings, divine encounters and supernatural healing on Fridays and Saturdays from one to three.
Healers in this town, it seems, value their time out of the office.

A decade ago – when I lived an hour from here in a tiny sheep-farming town at the edge of Victoria’s Mallee country – locals warned me about Daylesford: “I’d be careful going there if I were you, mate,” I was advised by the town’s all-knowing publican. “Bloody hippies everywhere.”

I didn’t confess I’d grown up in Byron Bay: that as a nine-year-old I was taken to a doctor who diagnosed an emotional blockage requiring acupuncture and meditation (I had a stomach ache; I suspect it was indigestion).

And so it’s with much anticipation that I finally make it to Daylesford a decade on. Most Melburnians know the many charms of this little village, but many in the rest of Australia have never heard of Daylesford – little more than an hour’s drive from the Victorian capital.

My publican buddy was telling porkies I suspect: my first impressions of town seem more Enid Blyton-esque than anything remotely Hunter S. Thompson; like a cutesy village in Dorset rather than another Nimbin.

There are no dreadlocked pot smokers in tie-dye; on the contrary, a different kind of mist has set across the rolling hills that surround this green little community and, as I walk around the town’s famous lake, retired couples with well-mannered pooches look up from communing with the ducks to bid me good day.
But as I look a little closer, I see an alternative universe.

Daylesford’s long been a place of healing: it has the largest number of mineral springs in the whole country. The Dreamtime stories of the Aboriginal people who first occupied this area all relate to these mineral waters and their ability to heal. Incidentally, Byron Bay’s Aboriginal name, Cavvanbah, also refers to the region’s healing properties – just one of the many characteristics I notice the two towns have in common.

And so city folk flock to Daylesford to be healed and nurtured in day spas and mineral springs, and in restaurants and cafes that dish up some of the best organic produce in Victoria, grown in the rich, chocolate-brown volcanic soil of the extinct volcano upon which the town is built.

It’s probably no surprise, therefore, that just an hour after hitting town I find myself covered in local black magma mud and suspended naked (bar a flimsy plastic G-string) in a bed cocooned by hot water. I’m at the Mineral Spa at Peppers Mineral Springs Hotel in Daylesford’s twin town, Hepburn Springs, and I’m on the receiving end of the signature Float Away spa experience, a salt and oil body exfoliation having washed away the city grime. As I float blissfully and weightlessly, malachite copper and zincite in a face mask seeps into my puckered cheeks.

Ninety minutes later, if I’m not already healed in some spiritual, supernatural or divine kind of way, I’m at least somewhere along the path to it.

In an effort to find the complete inner peace at the end of that path, three hours later I’m next to naked again on another bed, this time back in Daylesford, in the lush country gardens of the region’s most iconic restaurant and hotel, the Lake House.

At the Lake House’s Salus Spa, overlooking Daylesford’s pretty lake, I’m rubbed hard with hot local volcanic rocks and warm oils and polished with local lime and ginger for 90 minutes until I feel all shiny new: like a newborn babe, or a car straight out of the showroom.
Energy of the soul

Apparently, though, you don’t even need to use day spas to find the path to enlightenment round here; for healing comes right out of the ground in Daylesford.

I’m lunching at the Convent Gallery overlooking town from high up on Wombat Hill with general manager Tina Banitska. It’s a moody 19th-century former convent with eight exhibition spaces, regarded by many as Australia’s most beautiful gallery.

Banitska is typical of the long-term residents of Daylesford. She’s fascinating, friendly and more than just a little bit “otherworldly”.

She takes my hand in hers and tells me: “There’s more to Daylesford than day spas, you know.” She looks down across the sprawling gardens in the soft autumnal afternoon light. “There’s something special about this town,” she says.
“It’s immediately uplifting for the spirit, just to wander about. The energy of the place comes from the artistic, beautiful souls who live here. We live on an old volcano; there’s something boiling and bubbling right beneath us. You can heal yourself just by eating the food from the volcano.”

She may have a point, for food sure tastes different around Daylesford. Higher up on Wombat Hill the next day, I eat a hearty local breakfast beside the enchanted forest mural of noted local artist Allan Wolf-Tasker in 19th-century botanist Baron Ferdinand von Mueller’s epic Botanic Gardens. A log fire burns slowly, warming my soul. This is his wife and partner Alla Wolf-Tasker’s latest project.

It’s Wolf-Tasker who has been most instrumental in transforming Daylesford from what was a simple country town (in the late ’70s) to one of the best regional dining locales in Australia.

In the evening, I visit the restaurant that started it all – the Lake House – each year a recipient of two Chefs Hats and now considered one of Australia’s top 50 restaurants. Here food comes hand-picked by local producers each morning, Wolf-Tasker having long-established working relationships with small sustainable local growers.

Across town at the Argus Dining Room in Hepburn Springs, I feel the love of the land in meals that come with fruit and vegetables delivered from co-owners Wayne Cross and Chris Malden’s very own farm garden. While at Mercato Restaurant, near downtown Daylesford, I spend an entire afternoon gorging on a four-course lunch of local meats and herbs in a restored 1864 homestead.

It’s not all five-star dining around here either. Celebrated boutique winery Passing Clouds, five minutes’ drive out of town, serves up cuts of meats from the neighbour’s farm slow-roasted over a half-tonne charcoal fire pit.

I’m not entirely sure I’ve found total enlightenment in Daylesford. And neither did I find a town of “bloody hippies everywhere”. There are far too many doilies and too few Tibetan prayer flags for it to be a true rainbow town. But something Tina Banitska from Convent Gallery said keeps playing through my mind as I make my way back to the big smoke:

“It’s the community that makes Daylesford,” she said. “Nothing’s any good without the people, and these are the best people … anywhere.”