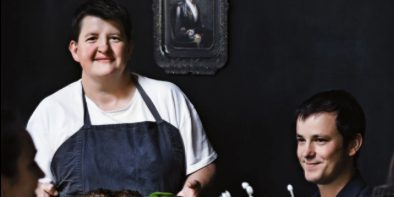 “The food I serve now is coming much more from the home and the heart. ”

When Annie Smithers sold her multi-award-winning restaurant Bistrot in Kyneton, Victoria last year, an idea was fermenting regarding her next move. She’d already opened Du Fermier, a French-inspired cafe in Trentham, about half an hour’s drive from Daylesford. It was there that Smithers hoped she could scale back operations, leaving her more time to spend in her beloved garden.

“I did think I could just sneak over here and have a local cafe,” she confides 12 months later, seated in the warm, inviting space that matches the true home-style bistro cooking she now serves. “It hasn’t happened like that. I started with a menu that represented what I thought was a French cafe, but no-one wanted to eat all the simple things.” What they preferred, it seemed, was another version of her previous, more formal establishment. At first, she gave the diners what they wanted, but it was never what she intended. “I’ve moved away from the starkly plated restaurant food that is the star of the night.” Click through for Smithers’ top entertaining tips.