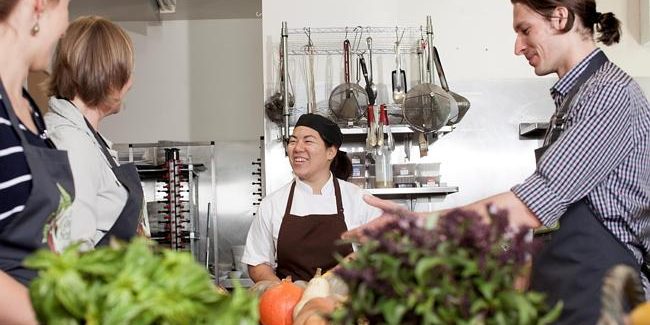 “I feel like I’m in a MasterChef pressure test and it’s so intoxicating that when I burn myself on the frypan I ignore the pain and declare it a badge of honour. ” – Zoe Curtis, Herald Sun

IT’S a line-up, but not as we know it. Chef Alla Wolf-Tasker has ordered us to show our hands and so 12 enthusiastic home cooks stand with our arms outstretched, though we’re not yet sure what the crime, or punishment, will be.

“Nail polish is a no no,” Wolf-Tasker explains. “It hides the dirt underneath your nails and that’s the last thing you want in a kitchen.”

The matter-of-fact welcome is Wolf-Tasker’s way of letting us know that the new cooking classes in the purpose-built demonstration kitchen at Daylesford’s Lake House are a serious business. That’s not to say the three-hour class won’t be fun, she explains, but she wants to show us what it’s really like to work in a restaurant kitchen environment.

“We presume that the people who come to us enjoy cooking and that they like a challenge,” Wolf-Tasker says. “They want culinary substance and they want to learn technique and the classes are taught by our trained chefs, not cooks, so we give them the same experience they’d find in a restaurant kitchen.”

And so it is that (despite my manicured nails) I find myself staring down two large bunches of cavalo nero that needs to be de-stemmed, blanched, seasoned, sauteed and pureed before, finally, being smeared on a plate. It’s one of six key elements in the deceivingly simply named “kangaroo” dish, the first of two our class will prepare and eat in just a few hours.

“We try to do at least one of our signature dishes in each class,” Wolf-Tasker says “And we don’t dumb the recipes down. We’ve found the calibre of home cooks who come to us are up to it.”

Coincidentally, I’d enjoyed the kangaroo the previous evening in the Lake House’s restaurant and would have deemed it well above my skill set to prepare. Yet here I am, less than 24 hours later, stripping the cavolo nero leaves like a maniac with one eye on my first portion blanching in a nearby stock pot and the other on the nearby frypan, which is heating ready for the sauteing. I feel like I’m in a MasterChef pressure test and it’s so intoxicating that when I burn myself on the frypan I ignore the pain and declare it a badge of honour. My fellow apprentice sous chefs are equally manic, but our instructing chef Wayne’s reassurance that cooking is 90 per cent common sense and 10 per cent skill settles our collective nerves.