Chook and cheese as early-birds run with a delicious success 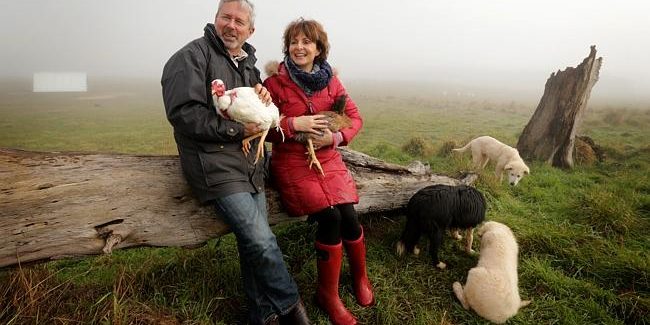 “The awards — the pinnacle event for Australia’s small-scale and artisan food producers — have never had a winner in its first year of business.” – John Lethlean

As records go, it’s no biggie. But when management consultants-turned-chook-farmers Bruce and Roz Burton last night claimed a prestigious delicious magazine Produce Award, it was a record-breaking achievement.

The awards — the pinnacle event for Australia’s small-scale and artisan food producers — have never had a winner in its first year of business.

Such has been the response to the Burtons’ Milking Yard Farm chickens since they began rearing birds last year that the small East Trentham producer, in central ­Victoria, has been named ­winner of a From the Paddock award first year out.

“It stood out first for its size, but what really captured the judges’ attention was the incredible flavour and texture of the meat.’’
And that’s what did it for judge and Sydney chef Guillaume Brahimi, who complimented the chickens, reared in open-range electric fence “pens” and rotated constantly through an ­orchard on the Burtons’ mixed-use farm. “At the end of the day, that’s what it’s all about, flavour and taste,’’ he said.

It was a double win for small-scale, non-intensive poultry last night as Michael Sommerlad, the breeder behind the ­impressive Milking Yard birds and several other premium chicken brands, ­including Buena Vista Farm, was also named winner of the ­delicious Produce Award for ­Innovation.

Sommerlad, a veteran of the poultry industry motivated by ­animal welfare, supplies a small number of “family farmers” around Australia with chicks bred from atypical meat species.

Sommerlad has created a breed developed from typically egg-­laying species that love to roam, forage, eat grass and bugs and lay down muscle slowly, ­rather than the breeds that dominate Australia’s meat chicken market, free-range or otherwise, Cobb and Ross.

The biggest gong, Producer of the Year, went to John and Lyndall Healy, a third-generation dairy farming and cheese-making family from Tasmania’s remote Pyengana Valley.

The Healy family has been farming and making cheese at ­Pyengana for more than 100 years, the premium aged cheddar having long since earned its stripes as one of Australia’s finest farmhouse cheeses (cheese made from the maker’s own herd). It seems to be getting better. According to judge and chef Matt Moran: “It’s one of the best cheddars I have tasted for a long time.”

The Producer of the Year title often escalates a brand to national prominence, particularly among elite chefs. Recent past winners have included SchuAm Berkshire Pork, Kinkawooka Mussels and Pristine Oysters, all from South Australia.
“For us it meant we could actually market our pork under our own brand rather than as a generic rare-breed pork,” says Damien Amery, of SchuAm. “It gave us the impetus to go out and sell to the market as ourselves, not simply as ‘Berkshire pork’. That was very significant.”

Produce Award judges include several of Australia’s most prominent chefs and restaurateurs.