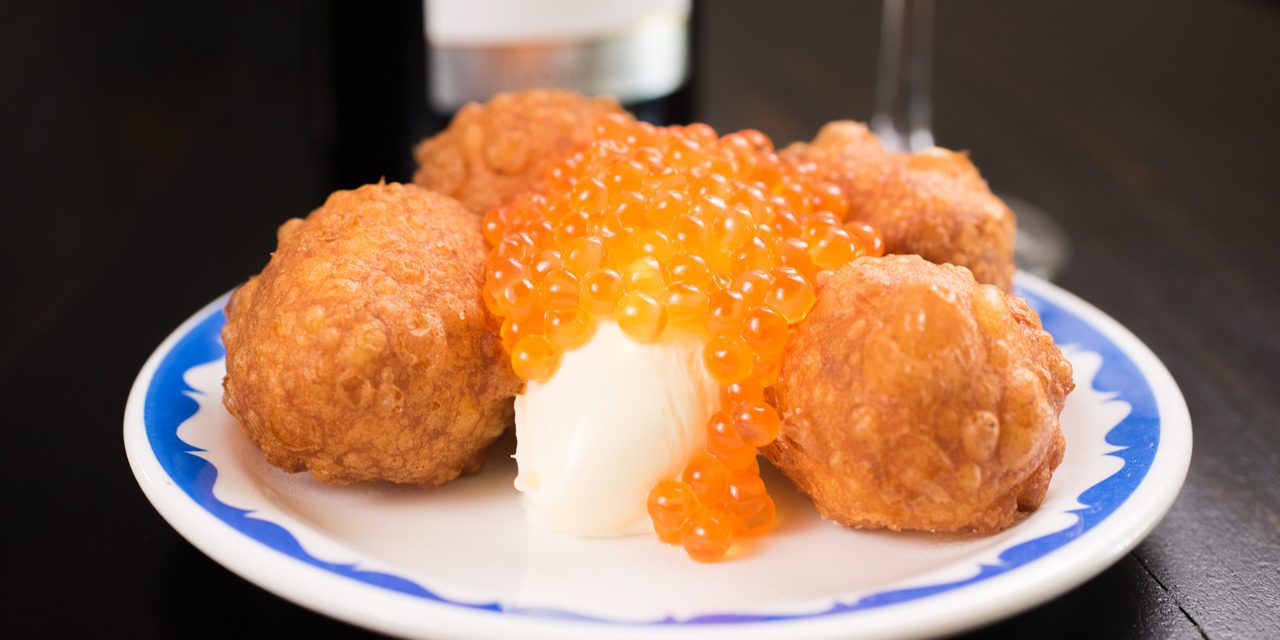 David Willcocks and the team at The Surly Goat take seasonality and provenance very seriously. Their menu changes weekly, evolving with the produce that is in its peak. And that’s what it is all about, simple food that heroes our tasty fresh ingredients.

This recipe is simple to bring together, but let’s be honest, it will never taste the same without our locally grown spuds, but it’s well worth experimenting with the varieties that you have at hand. Dutch Creams and Desiree potatoes are dry and usually work best.

Serves: 6-10 people as an aperitif

Cook the potatoes as you would for mashed potatoes in well-seasoned water, until they are tender all the way through. Once cooked, strain the water and allow to steam in the hot pot for a few minutes to remove some of the remaining moisture. Pass the potatoes through a drum sieve, mouli or ricer to make a dry potato puree.

In a heavy-based pot, add your milk, water and butter to the potato puree, and bring to a simmer. Ideally, your butter should have just melted at the point the liquids start bubbling.

Use the pot again to create a roux. Add the flour, butter and salt. With a wooden spoon, stir to make a dough, the mixture will need to be cooked for four to five minutes, over a low to medium heat, to remove the raw flour flavour.

Once cooked, transfer the roux to a clean bowl and one at a time add the eggs and yolk and beat into the dough until it is smooth and shiny. Once the eggs have all been incorporated fold in the potato until well combined.

Allow the dough to cool before rolling 40-50g balls with floured hands. Place the balls on a greased tray.

The balls should be fried at 165c in a deep fryer until golden. Remove from the oil and drain on absorbent paper and season with quality sea salt flakes.

Serve with a large dollop of Crème Fraiche garnished with plenty of salmon roe, cracked black pepper and chives.

They are best served quickly and with a glass of bubbles. We like Hanging Rock‘s NV Picnic Brut – available to order online.

The Surly Goat is a dedicated local restaurant, committed to offering smart contemporary food and keeping things simple so that their menu can change and evolve along with the seasons, making use of the produce that is in its moment and at its peak, and where possible from our passionate local producers. But beyond all making sure what is served is fresh and tasty!